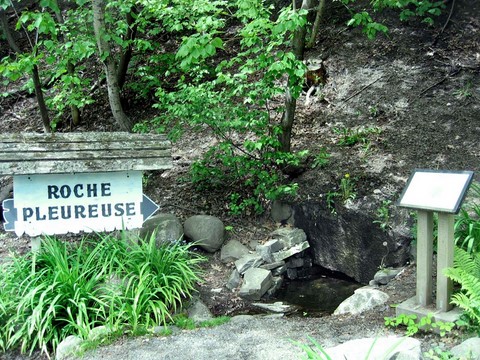 The legend of the Weeping Rock says that at the beginning of the 19th century (1805), a sailor, Charles Desgagnés, was going to marry Louise. But, before that, he had to make a trip to Europe. He loaded his boat, a three-masted, and left at the end of May. He promised his betrothed that he would come back in September to celebrate their union and that they would live at the tip of the island. September arrived and Louise soon went to sit on a stone by the river, on the tip of the island, patiently waiting for her future husband. No three-masted came into view, however. Day by day she continued to wait on this stone, but nothing came. Her father tried to reassure her by telling her that the wind might have been the cause, but nothing prevented her from moping. Even in winter, she watched for the arrival of her betrothed through the window of her house. When the warmer weather returned, she resumed her place on her stone, weeping and lamenting. Her grief grew day by day, so much so that at the end of May, her father never saw her again. They were several who looked for her, they looked everywhere on the island. After several days of searching, his father noticed an unusual stone, which he had never seen on the tip of the island. It was a stone that oozed, letting drops, endless tears flow in a basin.
This stone was crying. Louise will always mourn her missing betrothed.

A sign identifying the "Weeping Rock" indicates the said rock and an explanatory panel tells this legend.

The SETIAC (Tourism Isle-aux-Coudres), funded by Employment and Immigration Canada, highlighted this "Weeping Rock". It is a stone at the outlet of an underground spring, where water dribbles into a basin. A sign identifying the "Weeping Rock" indicates the said rock and an explanatory panel tells this legend.